A CHANCE TO BE HEARD 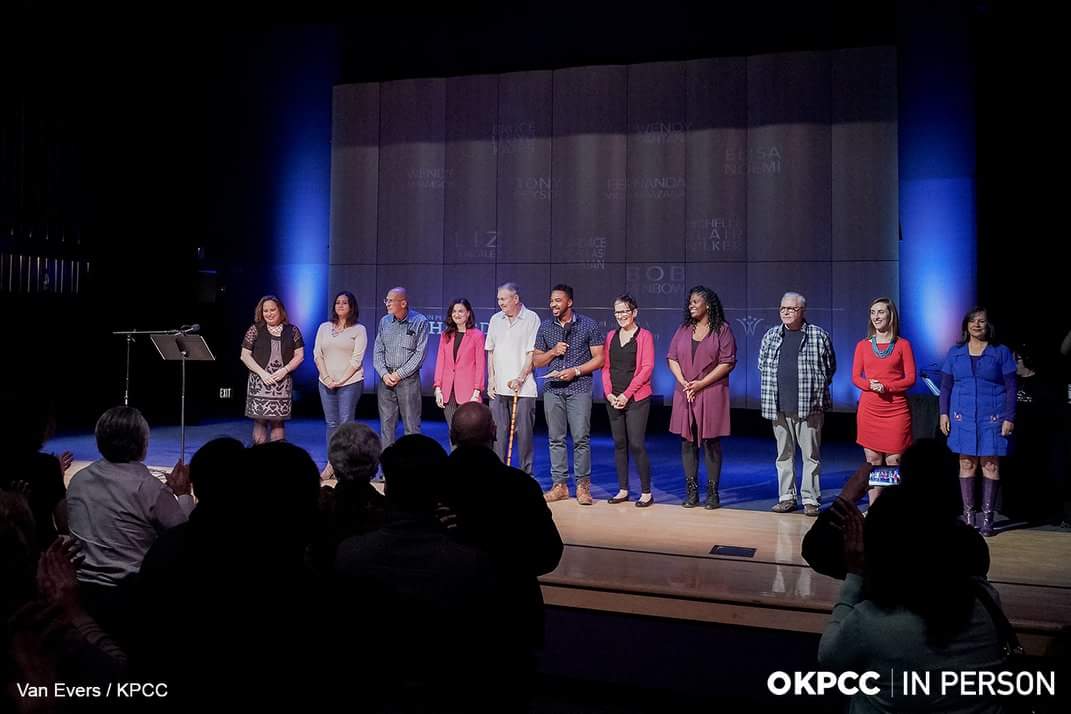 Remember… ‘earplugs out, sunglasses off, tilt the music stand up, pull the microphone to the side.  Oh, and most important of all… you are a badass brain cancer warrior!’

This was the pep talk I gave myself as I prepared to speak in front of an audience for the first time since the diagnosis of my brain tumor in October of 2014.  Recovery from the subsequent craniotomy has been a lengthy process and the ability to consistently use my voice only returned last year.  Although in the back of my mind I yearned to tell my story; speaking publicly again was the last thing I believed I could do and up until three weeks ago I would have laughed at the mere suggestion of it.  By the way, I still get overstimulated from certain lights and loud sounds hence the need for the earplugs and sunglasses.

But on the flip side… ‘what if my fears don’t materialize?  Do I really want to risk missing out on an opportunity to share my story and potentially help someone else?  What if I can prepare for the worst-case scenario?  Who says I can’t sneak a little kleenex onto the stage with me in case of a bloody nose… I know, I’ll carry kleenex in the pocket of the binder where I have multiple copies of my speech in multiple font sizes!’

And hey… ‘what if I’m successful?  What if I am able to tolerate the lights, the sounds, and the crowd?  What if I can grow and heal from this experience?’

I decided to go for it!

Allow me to revert to March 27, 2018. That was the day I met KPCC’s Community Engagement Director, Ashley Alvarado for the second time.   In both instances, Ashley was a presenter at an annual event called “Meet the Media” sponsored by The Nonprofit Partnership in Long Beach.  I was planning to just attend the session and write a blog post summarizing the key messages.  I emailed Ashley on March 26th letting her know I was looking forward to seeing her again (Ashley is so good at her job, that I genuinely believed we had a connection when after the first time we met she asked me the open-ended question, what do you do and we ended up talking for what felt like 30 minutes).   Self-conscious at the time due to my halted speech and sunglasses, I felt the need to respond with an explanation that included the fact that I used to be an executive leader in the non-profit sector, but I was on medical leave and recovering from a craniotomy.

This time when I arrived to hear her speak, Ashley knew who I was.    She said my story stuck with her since we first met a year ago.  She invited me to be a storyteller on “Unheard LA.”  The catch; she was talking about including me in the Baldwin Park show on April 7th!

So, during the 10 days between the second time I met Ashley and the “Unheard LA” show I had to: write a speech and make my way to the KPCC headquarters in Pasadena twice (once for a meeting with the KPCC team and then for a rehearsal with the other storytellers).  I also had an MRI and a meeting with my Neuro-oncologist, Dr. Timothy Cloughesy, at UCLA.  It was a busy 10 days, to say the least, but it was also exhilarating—which made me feel alive!  What is it they say about being ready for opportunity?  Thanks to having just published my blog, I felt ready to take on the challenge before me.  All I had to do was pick an angle of my story to develop for my speech and stick with it (which was a lot harder for me than I’m making it sound since I’m a perfectionist and have never really been all that decisive).

Once I announced on social media that I was doing this, two fellow survivors reached out and offered to help me rehearse prior to the show.  Both gave invaluable advice and support.  They guided me through my fears and helped me to create positive self-talk.

So, what was the result?  Let’s just say I’m glad I made the decision to do this.  The experience turned out to be even more incredible than I anticipated.  Each person on the KPCC team was wonderful to work with and very professional.  My voice has improved tremendously from this experience.  I’m also not as fearful about how I’ll handle crowds (in fact, I’m about to sign up for two awareness walks that will take place next month).  I have the confidence of having survived this event and I recognize I know how to prepare for worst case scenarios.  There were also rewards I couldn’t have predicted like a lady who approached me after the event and introduced herself stating that her sister had brain cancer (and aphasia) and now she felt like she understood a little better what she was going through before she passed.  And there is no better feeling than my son and husband being proud of me.  After having to witness me spending so much time in bed, I’m thankful they had a chance to see me standing up and persevering.

I was truly honored to be included among such a diverse group of interesting storytellers and to have been inducted into the storytelling community.  Our ensemble comprised of writers, actors, activists, spoken word artists, poets, a Baldwin Park historian, a very special singer/songwriter/ piano player, and little ol’ me… a badass brain cancer warrior.

To view a video of the show: https://www.youtube.com/watch?time_continue=7&v=eX4D_GdjMQs

Wendy Santana recalls overcoming a serious illness. At #UnheardLA, she also reflects on how getting back to Zumba class was the goal she never gave up on.Share your #UnheardLA story with us: http://bit.ly/yourkpccstory