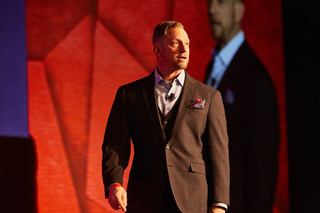 Greetings Matthew.  Thank you for taking the time to have this conversation with me.  I recently started interviewing brain tumor survivors who have written memoirs that I have read and listed in the suggested reading section of my blog. When I reached out to you I had just finished reading your book “Starting At The Finish Line” which I found relatable, moving, and very well-written.  I have to admit though, when I contacted you my original hope was that I would be helping out a fellow survivor (by adding what little I could to your visibility).  Clearly, I had no idea how much traction you had already gained from traveling the world as a motivational speaker—to giving a Ted Talk! Your book even reached #1 on Amazon (in various categories) just one week after it came out last year.  Congratulations on your recovery and tremendous success!!  There’s no doubt about it, you and your family are a force to be reckoned with.

For those that don’t know, Matthew S. Newman is a financial services wholesaler and father to three children.  In 2013 he was diagnosed with grade three astrocytoma (brain cancer) at 39 years old. Matthew’s memoir, “Starting At The Finish Line” chronicles the journey that he and his entire family took together which got him to a place of clarity, understanding, and appreciation. The book’s underlying message of why it’s important to get your financial planning in order is both inspirational and actionable.

“Cancer is evil and unfair, but it also allowed me to learn from it.  Change breeds opportunity.  I was taking advantage of the disease, not letting it take advantage of me.  I was making this my experience where I took cancer along for the ride, not the other way around.”  -Matthew S. Newman

Wendy: In your book, you described a car accident that led to the symptoms of not being able to sleep, intense headaches, and what you thought were “… eleven or more strokes that affected [your] speech.”  Can you talk about this and tell us what finally caused you to seek medical help?

Matt: It was a snowy, icy, miserable day in New Jersey. I was driving to my first appointment, and there were accidents all over the side of the road. I came to a traffic light, and my car hydroplaned right into the car in front of me. I flipped into the median, the airbag went off, and I got out of the car without a scratch on my body. The police and my wife told me to go to the hospital to get checked out, to make sure everything was okay. Like a typical Type A personality, I rented a car and went on my way. That night my head was killing me, I thought maybe I had hit my head during the accident, and it caused massive pain. I assumed it would go away over time, it actually got worse and worse every day. Within two weeks, I lost all ability to sleep as well. I’d pass out on the couch at 8:30, wake up at 10 in brutal pain.

I speak in front of crowds of all sizes as part of my career, and it’s something I love to do. That February I was giving a speech when I felt a hot flash hit me in the face. Once that happened, slur and gurgle poured out of my mouth. I thought I was having a stroke. I didn’t know where I was, what was going on, but I saw myself standing outside my body saying, “You are having a stroke.”

Over the next three months that happened 10 more times. After my 11th “stroke” I knew I needed to go to the hospital. I met my wife at Capital Health in Hopewell, NJ, and they gave me a CAT scan. Three hours later they told me I had a “lesion” on the left frontal lobe of my brain. A lesion to me was a cut or bruise, I assumed I hit my head during the car accident. I told them about the massive pain that affected my ability to sleep, and they said I was not having strokes, but seizures.

I was not scared; I was like that’s it! Now let’s fix it. I had MRI after MRI, and when I went for my last one at about 3am, the nurse came behind me and picked up the clipboard. “OK Mr. Newman, MRI/MRA with contrast, so we can see how big your brain tumor is.” I said, “it’s a lesion.” That was the moment at 39 I realized I had brain cancer.

Wendy: What was the size and location of your brain tumor?

Matt: it was about the size of a nickel, and It was in the left frontal lobe. That often affects speech and memory.

Wendy:  Yep, I know that all too well since my brain tumor was in the left frontal lobe too.

Wendy: You wrote about your cancer partner, Larry. Who was Larry, and why was this relationship particularly important to you?

Matt: Larry was my father in law. He was diagnosed with pancreatic cancer at 60. His goal was to see all his grandchildren born, and for them to be old enough to have real memories of him. He never bitched, he never complained, he took on the battle that he was put into and fought like a warrior. It was inspirational to watch.

My father in law Larry was fighting pancreatic cancer and would often be next to me on the couch. He was a warrior and inspirational to watch.

Wendy: I love the title of your book, how did you come up with it?

Matt: It was the summation of my personal journey and my career. People want what they can’t get. They want life insurance once they are sick. They want Long Term care when they are on the way to the nursing home. I preached having a plan in place prior to the bad happening my entire career and “Starting at the Finish Line” just seemed a perfect title to my story.

Wendy: How long did it take you to write the book and what was your goal?

Matt: I wrote this book 100 percent for myself. Writing became my catharsis. I saw life through new lenses and appreciated life from a different perspective after I was diagnosed. I understood the fragility of life and living in the moment and appreciating the now were real and pure.

With my positive outlook, I would push the fear and anxiety deep into my belly; this was my journey, cancer was just along for the ride.

I started writing as an outlet for my own therapy. I never dreamed anyone would read it, and frankly didn’t care. It made it crystal clear to me that people are attracted to realness and honesty. They are sick of the schtick. Many want to know there are others on a similar path as they are. Life became much clearer.

Wendy: How did the message of financial preparation get reinforced for you throughout your battle?

Matt: I preached it every day. Plan in advance of the bad, that’s the job of the financial planner. I realized in the hospital that every speech I ever gave was actually about me. I was the shoemaker whose kids HAD shoes. Everything I spoke about I did, and it allowed me to focus on the battle at hand and avoid regret and resentment.

Wendy: What did cancer teach you about life and balance?

Matt: Life is fragile. Cancer may take us physically, but it will never take us spiritually.

We own our legacies, and if we allow our legacies to be taken over by cancer, we let the disease win. This is my life, my journey, and I define who I am. Cancer is just riding shotgun.

Wendy: If people that are inspired by your story want to take action, what would you recommend they do first?  Is it possible for people to obtain life insurance, for example, after being diagnosed with a disease such as cancer?

Matt: There are basic things that need to be done, where wealth is an irrelevancy. Make sure your will is done, your power of attorney, your company benefits. There are affordable ways to get life insurance. Which provides some semblance of good news to loved ones at extremely difficult times.  See a financial planner to help guide you in the right direction in advance of the bad. Nobody plans to fail, they fail to plan!

WENDY: Thank you again for your time, Matt. I’ve heard you say many times, we are a “family of warriors” and I am honored to be considered a part of your warrior family. Wishing you the very best now and always.

Hello.  My name is Wendy and I’m a recovering workaholic.  I’m also a brain tumor/cancer survivor.

The purpose of this blog is to share my experiences, memories, resources, and self-discoveries as I continue to transform from a workaholic into a more balanced person.  I have read several books and stories about others who have had similar experiences (see the suggested reading page) and each has helped me to get to the place of acceptance of my new normal.  My ultimate goal is that by sharing my journey someone else will be helped as well.  My vision is that this site will serve as a landing space where people come for information and inspiration.

Please feel free to email me with any comments or suggestions at: wendy.2ndchance2live@gmail.com

©2ndChance2Live.com and Life in the GRAY, 2018-2021. Unauthorized use and/or duplication of this material without express and written permission from this site’s author and/or owner is strictly prohibited. Excerpts and links may be used, provided that full and clear credit is given to Wendy Santana, 2ndChance2Live.com and Life in the GRAY with appropriate and specific direction to the original content.