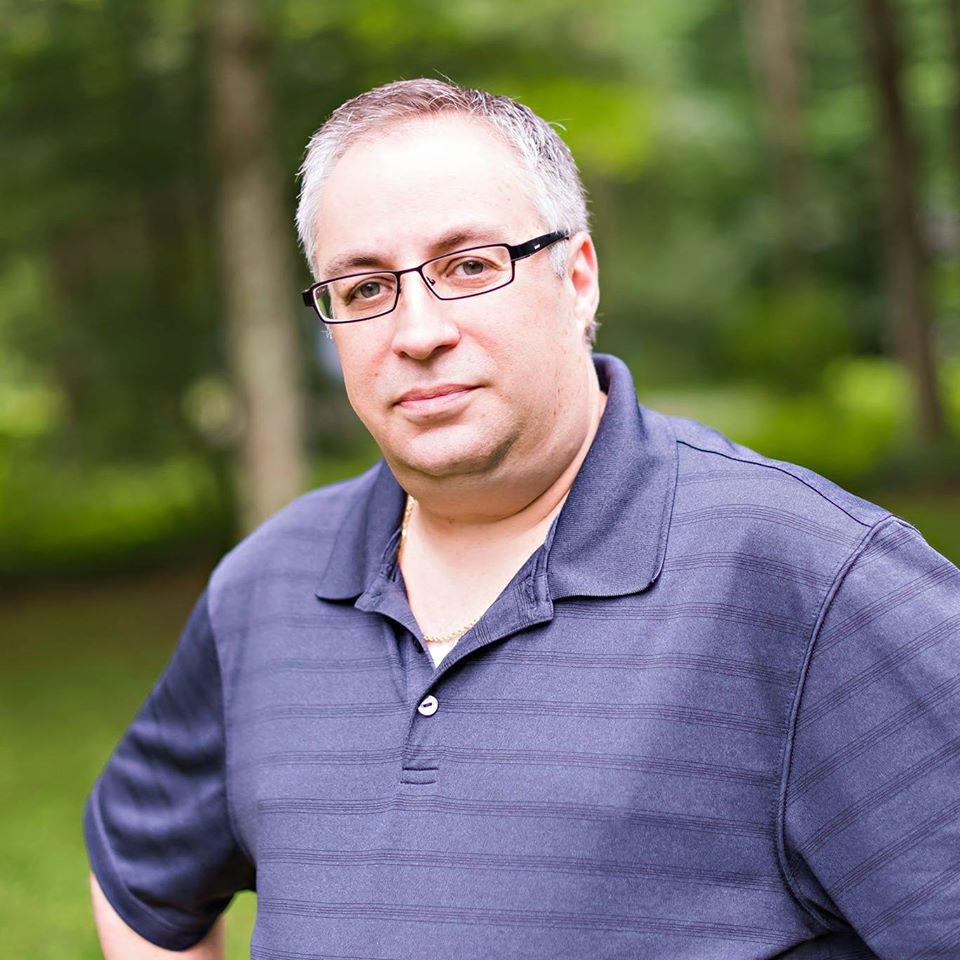 Hello Rick. Thank you for taking the time out of your busy schedule to participate in this blog post.  In my opinion, you have become an important figure in the brain tumor community so much so that some could call you a brain tumor celebrity. You have managed to achieve a great deal since the discovery of your brain tumor(s) and along the way you have inspired countless fellow survivors such as me.

“Every day can be a new beginning, even if moments right before that seemed like an ending.” -Rick Franzo

WENDY: How are you doing now?

RICK: Haha!  A celebrity you say?  😊 I sure don’t think of myself as a celebrity of any type but thank you for your kind words.  I am doing pretty good, all things considered.

WENDY: Can you please share a synopsis of your journey and tell us about the symptoms you were having?

RICK: Absolutely! So, let’s take a trip back in time….

I was playing horseshoes at a BBQ on May 9, 2009, when I lost all strength and coordination on my right side out of nowhere. It scared me enough for me to go to my doctor two days later, who sent me to a neurologist, who ordered MRI’s for my head and neck.

These MRI’s showed a huge brain tumor, which my neurosurgeon said was the size of a cheeseburger!

He said it was a Meningioma, a mostly “benign” but in my case very invasive brain tumor. It hit critical mass at the BBQ, which in my case meant it pushed my brain down as far as it would go and pushed my skull up 4cm and had probably been growing at least 10 years!

As for symptoms, I look back and I had very subtle symptoms, especially about 18 months before the discovery that could have been anything…. nausea at times, sinus problems, not able to run well, etc. Nothing really that serious until the BBQ. If it wasn’t for the game of horseshoes that day, I was told that I would have had a seizure that would have killed me or slipped into a coma that I never would have woken up from.

On June 15, 2009, I was embolized to cut off the blood flow to six large blood vessels feeding this beast during an excruciating awake procedure. The next day I had 10.5 hours of surgery performed by two teams of neurosurgeons that removed the entire tumor. Even though they removed the entire tumor, I was paralyzed from the waist down (the collateral brain damage from this “benign” tumor was on my motor skills and mobility)…also my skull was compromised so I now have a huge titanium plate on 1/3 of my head.

I spent months in rehab learning to walk again as new connections were made from my brain, through my spine to my lower body. I now walk, work, drive and live a relatively normal life again.

I was diagnosed in February 2011 with yet another Meningioma (diagnosed as residual growth). In February 2017 I was diagnosed yet again with brain tumor number three, but this time it was a different type, an Acoustic Neuroma, that is wrapped around my 8th cranial nerve, causing my right ear to be 60% deafer and my balance to be compromised once again.  I underwent gamma knife radiation in May of 2017, and as the tumor started to die, it swelled up, causing me to have great difficulty walking yet again.  I underwent outpatient physical therapy for approximately four months to correct this.  I just had my yearly MRI Dec. 16th, 2019, so fingers crossed for a stable outcome.  A clear MRI will never be in my future again…

WENDY: Bless you, Rick. You have been through more in the last 10 years than many people endure an entire lifetime!

Let’s talk about your book; “How Horseshoes Saved My Life – A tale of two brain tumors.”  I truly enjoy your writing style especially your candor and sense of humor.  As a fellow survivor, I found your book to be educational, encouraging and insightful.  It is easy to follow and straight forward.  I particularly appreciated the Lesson Learned at the end of each chapter.  Of all the lessons you wrote about, is there one that stands out to you more than the others after all this time?

RICK: There isn’t really one that stands out to me at this point, it really was a reflection of who I was at the time and what I considered important that I either didn’t know or where some gaps or lessons that I realized in hindsight.  I’m glad it helps others though.

WENDY: It seems as if you had a clear direction of where you wanted to go with your book.  How did you come up with the format for your book, have you always been a writer?

RICK: I had no format except the one based on every book I’ve read in my life; the preface, the beginning to give a point of reference, the middle to get to the bulk of the tale, and the conclusion to wrap it up.  I wrote it in my own words, my own voice, bad language and all, so it just flowed and worked out to be formatted pretty close to what it should have looked like in completion.

WENDY: How long after your diagnosis did you decide you were going to turn your story into a memoir?  What was your goal?

RICK: I decided to write about six months after I left rehab., when I was on a self-re-discovery path, trying to wrap my head (pun intended) around the “new me.”  I wrote to start the process of healing myself and the dynamic turned into helping others cope, realizing as I got involved in the brain tumor community that what happened wasn’t exclusive to just me, but so many worldwide.

WENDY: So your first brain tumor was discovered in May of 2009 and your book was published in September of 2013.  It’s as if you’re writing in real-time though.  How were you able to recall with so much detail?

RICK: I kept a journal while committed to in-patient rehab. learning to walk again, lots of time for much self-refection.  It took a long time for me to complete the book, very painful to re-live all that.  I still haven’t opened that journal since the book was published.  It’s very personal and a bit scary to share my story with others, to let it all out there.   I was at my most vulnerable, very tough to revisit it even now.

WENDY: I get that. Let’s move on to “Brain Tumor Talk” — (a private Facebook group that has grown to nearly 12,000 members)!  You started the group 10 years ago, what was your motivation?

RICK: Again, to heal, to connect with others on a similar journey.  It’s the largest general brain tumor support group on the planet.  Brain Tumor Talk is everyone’s shared space. It helps us connect. It spreads opportunity. It enables us to learn. It gives us a voice. It makes us stronger and safer together.

WENDY: Didn’t you also have a brain tumor radio talk show at some point as well?  What can you tell us about that?

RICK: Yes, I created, scripted, produced, engineered and hosted a radio show that was streamed live and podcasted worldwide; “Brain Tumor Talk Worldwide Radio Show.” It aired from 2013 to 2018 so approximately four and a half years.  I have a background as a professional on-air DJ from many many moons ago, so it was a great platform to spread awareness and offer support.

WENDY: Within the last year you started your own business, “The Growth Coach Poconos” can you talk about what you are doing now and how you arrived at this point?

RICK: Prior to opening The Growth Coach, I was working as a supervisor at a state University and doing some light consulting work as well. I truly enjoyed the consulting work and I was looking for a program or format to help me expand that part of my professional career when I came across The Growth Coach. The components of The Growth Coach program absolutely match exactly what I was looking for and the mission of helping people find balance and success spoke to me. I bought the franchise, formed a Corporation (Hannah HDA Corp) and began my coaching career.

Not many people in my position who were paralyzed and had the deficits I did (and still do to a certain extent) have the opportunity to be the CEO of their own business, so I am happy to have this shot, a 2nd chance at life for sure.

When you’re a business owner or a business professional, it’s easy to feel alone. You don’t have many peers to talk to about your challenges, successes, and plans. I know what that’s like, both as a business leader and in my personal life with my struggles with brain tumors. Everyone is on their own kind of journey and none of us want to do that alone. That’s part of what makes my role as a business coach unique.

I conduct many group workshops, so it builds a community of like-minded individuals who can share successes and challenges to help everyone grow together, just like in the brain tumor community.  No one walks alone.

WENDY: Speaking of the brain tumor community, there is a term Benign is not Fine.  Are you the person who came up with that phrase? Your brain tumor(s) almost killed you.  What message do you most want people to hear about “benign” brain tumors?

RICK: Yes, I think I might have been the first one to coin the phrase, but regardless of who it was, it’s an important phrase for sure. Benign signifies harmless and no brain tumor is that!  With 120-130 types of primary brain tumors, making accurate and efficient diagnosis and treatments is complicated.  Anything that’s in your head that doesn’t belong there is a danger and it’s all about location, location, location.

Benign is not Fine! Benign signifies harmless and no brain tumor is that!

WENDY: What advice do you have for someone newly diagnosed with this disease?

RICK: Don’t pay attention to the survival statistics, they are not based on you, you are a statistic of one!

WENDY: Rick, you put the “W” in Warrior. Thank you again for your time. Best wishes for continued stable scan results and much love to you always.