I was originally going to call the book I am working on “Badass Brain Cancer Warrior.”  Then I realized, that could imply I already consider myself a badass…and truth be told, I’m not a badass—not really—not yet.

While there are many badasses in the world, I cannot in good conscience proclaim to be one of them.  Don’t get me wrong, I do have my badass moments but I’m still a work in progress.

To me, a badass is someone who can make the most out of every day and every opportunity.  Take Annette for example.  In my opinion, Annette is the Queen of all Badasses and represents the badass I am aspiring to be someday.

I met Annette in Mazatlan last summer during a family vacation which we took with our good friends Janine and Abram and their son, Jonah.  I was feeling horrible and tried to cancel my participation in the excursion twice.  I didn’t mind if everyone else went, I just didn’t feel well enough to join them.  Something was going on with my body again and it was more than my brain this time.  I had been battling chronic nausea and pain in what I thought was my lower abdomen for the last few years but during the months leading up to our trip, the pain was becoming much more intense and persistent.  I stopped doing the very things that were bringing me tremendous gains during the previous year, such as water fitness and yoga.  By this time, it hurt just to walk.  I was in the process of trying to figure out what was going on.  The only information I had at this point was that a cyst about the size of a dime was found on my left ovary during a pelvic ultrasound.  As it turned out something much more insidious was going on.  A few months later, with encouragement from my husband, we finally discovered the cyst was really the size of a softball (but more about that at a later time).  I felt so terrible that just thinking about the journey from the airplane to the resort was overwhelming to me; let alone the idea of attempting to relax at the resort pool and doing touristy things like shopping and eating out.

Despite my protests, I was encouraged by my husband and our friends to join them on the trip, and so I went.  It was a long journey and once we FINALLY made it to the resort, I cried.  And by crying, I mean I sobbed.  I sobbed loud enough for my son to notice.  I remember feeling bad about crying in front of him and wondering what kind of an example I was setting.

You see, I still have a few lingering deficits since my craniotomy.  For instance; my right side gets weak when I’m tired or nervous, my speech suffers, and I get overstimulated by certain kinds of lights and loud sounds.  Even with earplugs in and sunglasses on it’s very difficult for me to be in places that are overly bright and noisy.  And, as anyone who has ever traveled through LAX knows there are plenty of lights and loud sounds to endure.  Despite my best efforts not to show it, I was in a lot of pain as we made our way through the airport, the car rental, and the resort lobby that day.  I was truly miserable and all it took was for my husband, Luis, to rush me as we were getting into the golf cart that would take us to the unit where we would be residing for the week–and I lost it.  I know, I know “poor me, right?”  At the time, I just couldn’t imagine how I was going to make it through the entire week at this beautiful resort where all I had to do was relax by the pool and take it easy.  All I was thinking about as I had my breakdown was that it was hot, it was humid, I (like the others in our group) was hungry, I was tired, I didn’t feel well, my head was vibrating, I had cramps and so forth.  I wanted to turn around and go back home as soon as possible.  I wanted to return to what had become my safe zone. 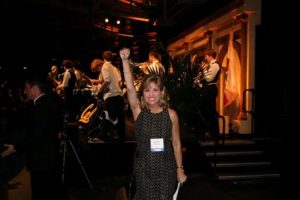 Annette at the Charter Gala event she used to organize.

I spent the entire first day of our vacation by myself in our suite trying to recover from the ordeal of traveling.  That night Abram, Janine, and Luis told me about Annette, an incredible woman they met at the pool during the day.  They shared her story with me.  I learned that we were both from Southern California and we both built successful careers based on activities that culminated in raising money for the organizations we represented; she was a director of events, reunions and an alumni relations professional who specialized in universities–and I was a major gifts specialist turned executive director for various non-profit social service organizations.

One day in 2012, Annette went into the hospital for what she thought was going to be a routine hysterectomy.  Since her procedure was laparoscopic, she was supposed to be discharged that same day.  However, the night of the surgery she started to get sick.  Her doctor thought she had gas from the anesthesia and decided to keep her another day in the hospital. Unbeknownst to her, the hospital staff administered an enema.  As it turned out, her bowel was severed during surgery and the enema made a bad situation even worse.   The second day after her hysterectomy Annette went into septic shock and was transferred to the ICU.  Two years later she finally left the hospital but without any of her limbs.  She had become a quadruple amputee and had to learn how to rebuild her life.  Let’s just say hearing Annette’s story snapped me out of my funk.  Inspired and feeling guilty, I realized that even with my current challenges, I still had a life to live and I was reminded once again of all that I had to be grateful for.

The next day at about 4 pm, I finally pulled myself together and made it down to the pool to look for Annette. Abram noticed me and quickly found her to let her know I was there (apparently Abram, Janine, and Luis shared my story with her the day before).  Annette was very social and in the middle of a conversation with a group of people in the pool. I saw her look up and smile at me.  And before I knew it, her husband carried her over (along with her drink) and she embraced me.  We had an instant connection and mutual love and respect for each other.  We spent the next few hours sharing our stories.  Her kids literally had to break us up because it was after 6 pm and time for them to get ready for dinner.  During our conversation, I learned her husband, Rolando, was formerly in the non-profit world as well. He was an executive director for nearly a decade and left his position to become a full-time caretaker for Annette.  I gleaned a few more details about Annette’s story like the fact that she was in a coma for four months and prepared for the worst, her family was brought in six times to say their last “goodbyes” because she wasn’t supposed to survive.

We compared notes about speech therapy (me wanting to practice interviewing skills when I could barely speak, physical therapy, and so forth).  She also told me all about her wonderful service dog, Patch.  We later learned through Facebook that we both shared the same badass physical therapist (the ever so affable, David Tai) during our recoveries.

I ended up joining my group for dinner that night.  I figured if Annette could do it, I could too.  From that point on, I made the most of our time in Mazatlan and beyond. 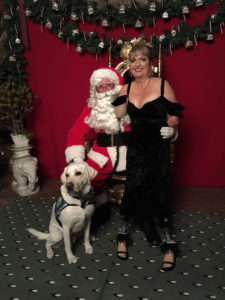 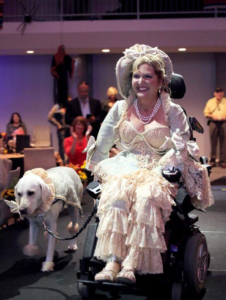