“From Attendee to Speaker Series” Interview with Josh Neman, Ph.D.

An interview with, Josh Neman, Ph.D.

There’s something special about Josh Neman, Ph.D. (a.k.a. Josh).  I’m not just saying that because he’s a neuroscientist working to better discern and identify a cure for cancer. He is…well… in addition to being brilliant…he’s also very human.  He strives to bring the human element to something very few humans can understand and he’s actually interested in the people behind the cells.

Last month Josh served as the Chair of an American Brain Tumor Association (ABTA) “Regional Patient & Family Meeting” in partnership with the Keck School of Medicine at USC and USC Neurosciences. In September, I wrote about the ABTA’s 2020 Virtual National Conference from the perspective of an attendee. As stated in the first two posts of this series (“An Interview with metastatic brain tumor patient, Niki Kozak”) and (“An Interview with the ABTA’s Program Manager, Emily Lippert”) this time around my husband and I were invited to participate as panelists during the patient/caregiver segment so I decided to write a series — a behind the scenes look at what goes into these meetings and conferences.

“Josh is highly engaged with the ABTA,” states Emily Lippert. “He started off as an ABTA research grant recipient where he was awarded a grant to fund research about Medulloblastoma, a tumor that mainly occurs in children. He then became a member of the ABTA’s “Annual Alumni Research Network” (AARN). In 2017, he attended the ABTA’s “BT5K” Los Angeles event where he approached ABTA staff with the idea to host future BT5K events on USC’s Campus. Since then, the fundraising race has been held at USC until it went virtual this year due to the pandemic. His engagement and leadership led to further USC’s involvement with the ABTA. In the same year that Josh had the idea to host the BT5K, the ABTA wanted to bring its “Regional Patient and Family Meeting” to the Los Angeles area. The ABTA’s “Regional Patient and Family Meetings” are held in partnership with leading institutions across the country. We knew Josh would make the perfect candidate to serve as Chair of the program. Just as Josh offered to host the ABTA’s BT5K Los Angeles event, he suggested USC host the “Regional Patient and Family Meeting.” Josh has served as Chair of the ABTA Los Angeles “Regional Patient & Family Meeting” for three years, with this year being virtual. As Chair, Josh provides guidance on developing the program and selecting topics and speakers. Josh and USC are both valuable partners in supporting our events. In addition to these roles, Josh has spoken at several other ABTA meetings, events, and conferences particularly on the topic of brain metastasis.”

So, with all of that said…I will be shifting gears today and trying something new. Typically, these interviews are provided in a written format and conducted via email. In this case, I will be sharing a raw and unedited Zoom video of my interview with Josh.

Working on this gave me an opportunity to face and overcome several lingering challenges following my craniotomy. As many of you know, I had a primary brain tumor that was located in my left frontal lobe and spread across the regions of my brain responsible for speech and movement. I had aphasia and halted speech for a few years. I have avoided using the phone and doing live interviews for far too long. I am thankful for this interview because, in addition to possibly helping others, it also gave me the chance to tackle several firsts, for instance:

I am incredibly grateful to Josh for his time and for helping me with all these firsts. Our interview is below, just click the image to watch.

“I’ve always been fascinated with the brain. It is truly within the body, the final frontier.“ – Josh Neman, Ph.d.

“My mom is a scientist/zoologist…I love science, so it’s in my genes”

The following video is of the ABTA Patient & Family Meeting that we referenced. Josh’s presentation starts at 49:31.

Click here to learn more about the important work that Josh is doing or visit: https://sites.usc.edu/nemanlab/ 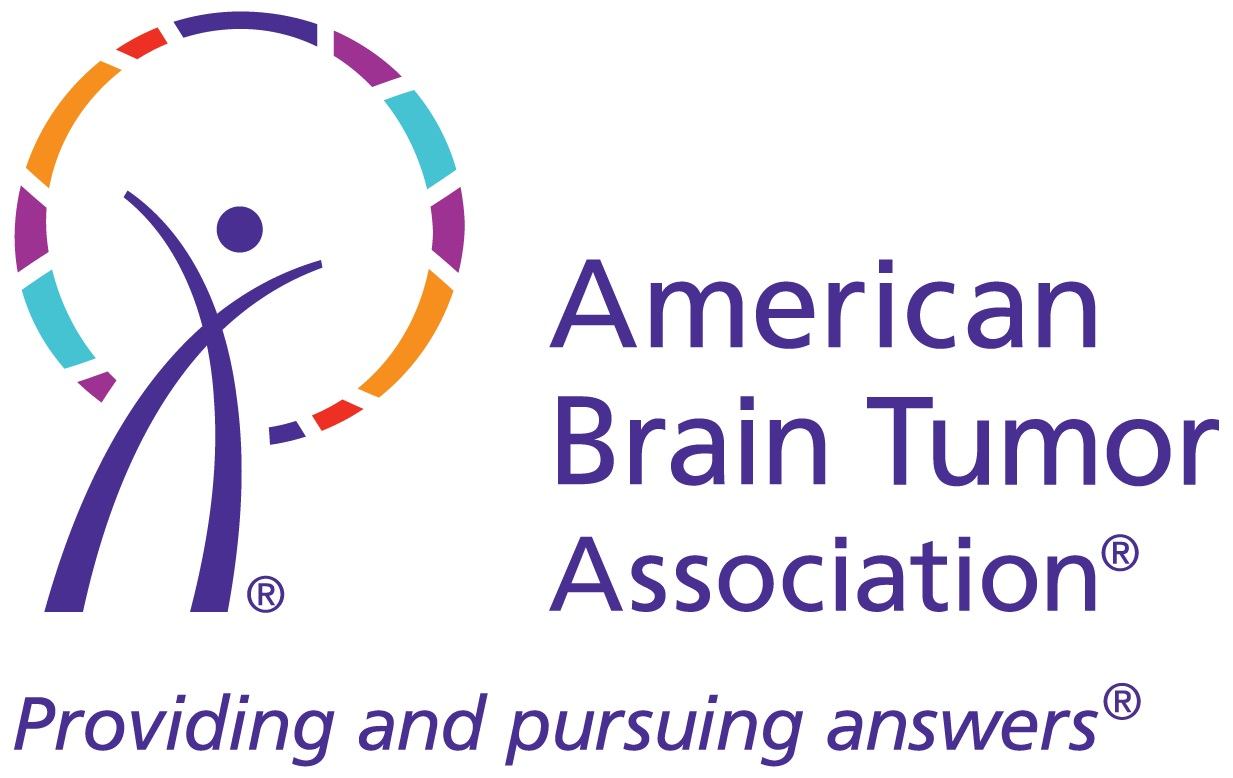 ABTA conferences and meetings are offered free to patients and caregivers thanks to the generous support from sponsors (see list below) and donors.

If you would like to donate to the ABTA to support research or future informational activities click here. 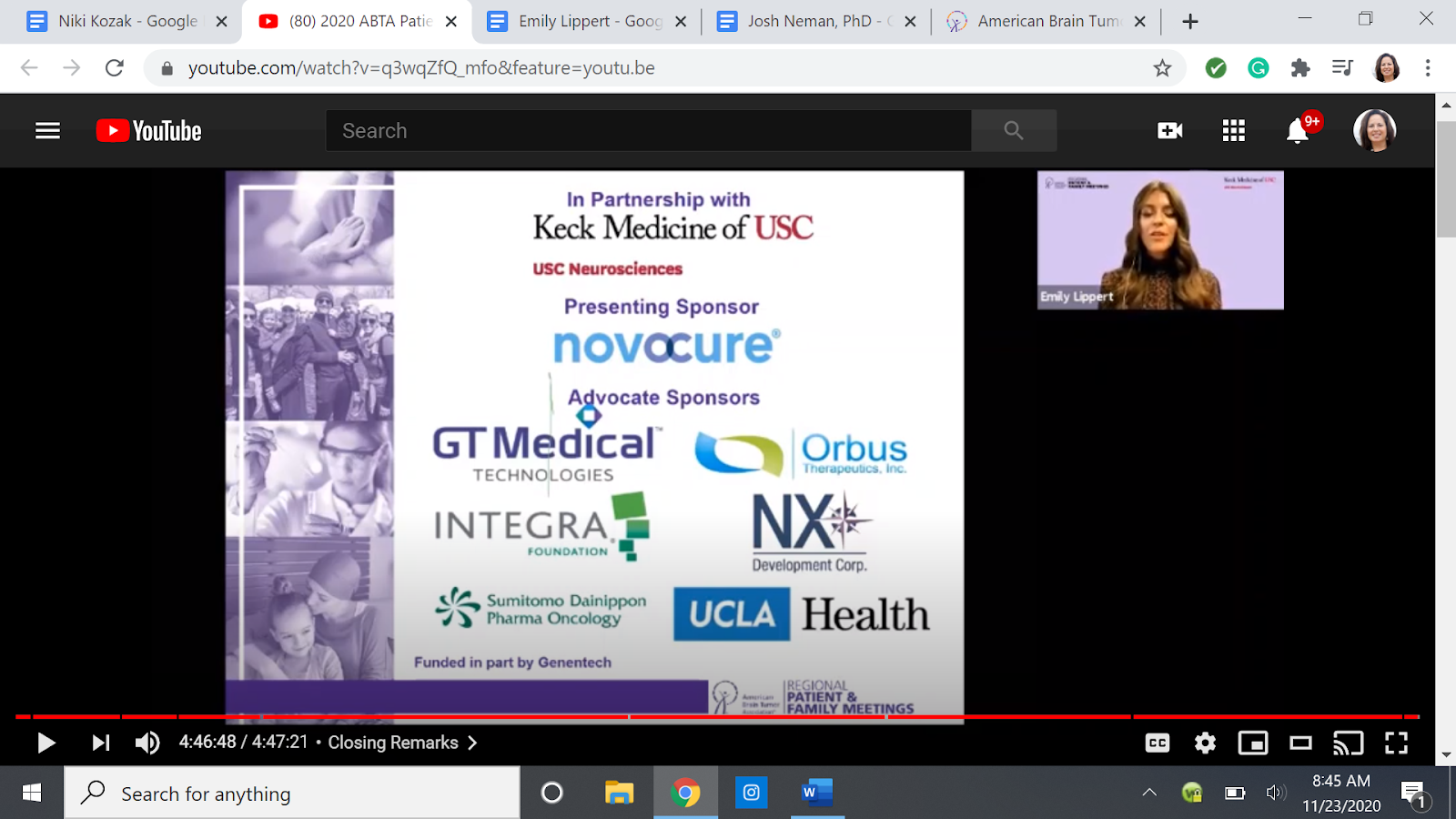